For instructional purposes (either when experimenting on your own, or when demonstrating code to others) it's always useful to be able to run snippets of code in a REPL, or a similar environment allowing fast turnaround in the edit/compile/run cycle.

When using Java, other IDEs offer ways to get REPL-like behavior, but what if you don't want to use a traditional Java IDE?

Perhaps you just want to demonstrate a trivial bit of code without much overhead.

In that situation, a couple of nice options for Java are:

If you're on a Mac, GroovyConsole can be installed via the homebrew groovy formula (or, just get it from http://groovy.codehaus.org):

Launch GroovyConsole with this command:

Then simply type in a code snippet and run it with <Command-R> (or on Windows, <CTRL-R>): 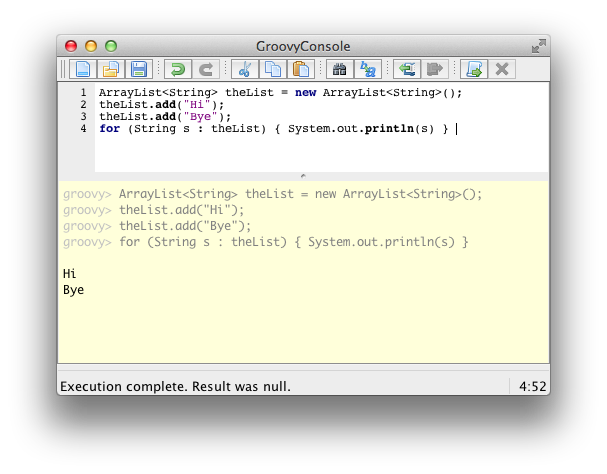 Then, compile your program without leaving vim by passing the file open in your vim buffer to javac, using the :! command sequence and %

If all goes well, you'll temporarily be dropped to the shell, with no visible errors, and get prompted to press ENTER to continue back to vim:

Back in the editor, use :!java Foo to invoke the Java class file you just created with javac:

Finally, you'll see your program's output in the console.

For further fun, try compiling with javac -g %, then launch your class file with jdb Foo to debug your program from within vim.

Also, you might consider taking the javacomplete omni-completion plugin for a spin.