I was interested in seeing how quickly one can add a lightbox gallery to a Rails app nowadays.

As it happens, there's really not much to it, especially when using the fancybox-rails gem.

This post describes how to bring up an existing image viewer app (the "gallery-after" app from the github repo for Railscasts episode # 381), then add fancybox support to it. 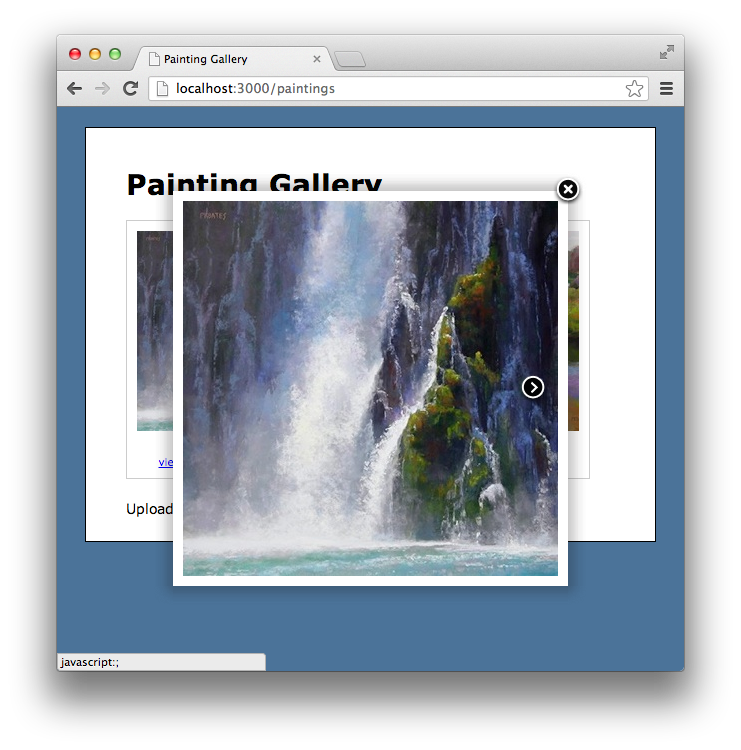 Setting up a Rails app that displays images

Rather than create one from scratch, let's grab an existing app.

As mentioned above, one of the apps from Railscasts episode # 381 will do nicely. To get the files from github:

When that completes, cd into the "gallery-after" app dir we'll be using:

So next, install imagemagick. On OS X, you can use this homebrew command:

On Linux distributions, ImageMagick will more than likely be available in your package management system.

But I ran into a snag:

On my system, trying to 'bundle install' failed on the rmagick gem, during extension compilation, with this error:

I modified gallery-after/Gemfile to make bundler fetch rmagick 2.13.2 - a version of the gem that resolves the install issue:

...and the installation of rmagick should succeed.

Side note: Near as I could tell, the rmagick problem is due to an incompatibility between rmagick 2.13.1 and the latest version of ImageMagick available via homebrew.

And the gallery-after/Gemfile.lock comes configured to install rmagick version 2.13.1, leading to the problem.

Point a browser at localhost:3000 and drag-and-drop some image files into your browser window.

This will insert the images into your DB, which will come in handy later so we have something to view in fancybox.

Adding fancybox-rails to the app

Then tell bundler to install it:

Edit app/assets/javascripts/application.js and add the fancybox line just under the jquery require statement that will already be in the file:

Edit app/assets/stylesheets/application.css and add the fancybox line above the require_tree line:

The last step is to add a gallery link to the paintings partial, where the link's class attribute value is set to the "grouped_elements" identifier we added to paintings.js.coffee.

Also, the gallery link's rel attribute value needs to be defined; in fancybox elements with the same rel value are considered part of the same gallery, which enables flipping between the images without having to close the fancybox viewer.

To take care of those steps, edit app/views/paintings/_painting.html.erb and insert the "view in gallery" link shown below, above the existing edit/remove links:

That's all there is to it.

When you restart your Rails app, each image the app displays should now have a "view in gallery" link below it that launches fancybox, with navigation controls to skip from image to image!

Not too shabby for just a handful of extra lines of code.